For Todd, on National Siblings Day

1. Sometimes you have to leave home to find home.

After my brother Todd, three years my senior, finished college in Georgia, he lived and worked in Athens–arguably one of the best places in a largely conservative state for an intelligent, unconventional, creative-minded twenty-something. After a few years doing quality-control testing in a lab, he decided to take a leap into the unknown: he and one of his best friends moved out west to seek their fortunes.  They visited with our paternal grandmother and family in Texas for a spell, then headed to New Mexico, where they lived with my maternal grandmother, looked for work, and took up rock-climbing. Todd was drawn to the subtle beauty of  the desert, the broad open spaces of the mesa. He felt at home in the west, and it was there he eventually fell in love, got a second degree, found rewarding work, and began raising a family.

Both of us, I think, always felt our southern hometown, though lovely in many ways, was a poor fit, a size too small. And when I found myself in Georgia in my mid-thirties, in need of a fresh start, it was in part my big brother’s example of striking out on his own that emboldened me to sell my house, leave everything I knew, and move to Virginia. It’s probably the single most important choice I made that helped me find my path and figure out my own priorities.

2. “Parent” and “spouse” are roles, not identities—and we play those roles best when we let our essential selves shine through.

My niece Natasha was born in August, the same weekend I was loading a moving van to head to Ohio for graduate school.  I didn’t get to meet her until December, when first we gathered, unexpectedly, in Texas for my grandmother’s funeral, then a few weeks later in New Mexico for Christmas. I didn’t realize until I saw Todd with her that for some reason I’d expected him, now that he was a father himself, to have magically morphed into our dad: clean-cut and clean-shaven, sporting khakis and button-downs and suit jackets on Sundays, reserved in demeanor and measured in opinion. Instead, I was surprised to find my brother still very much himself, mischievous sense of humor intact along with his long hair, beard, and preferred wardrobe of jeans, tees, and flannel shirts. He was still forthright and outspoken, unpersuaded by institutionalized religion, and exuberantly excited about Christmas, as he’d always been. He was also clearly besotted with and amazed by this exquisite creature, his newborn daughter.

I don’t why I’d expected him to become someone else; I think I’d just been so thoroughly imprinted by our own dad’s version of fatherhood, I’d internalized it as a universal (most of my friends’ dads I encountered growing up were very much like ours, so I didn’t have a lot of alternative models). But of course Todd didn’t need to look or behave like my Platonic ideal of dad-ness to be a great dad. He was (and is) a great father because fatherhood brought out his best self—loving, committed, patient, playful. Watching qualities like his love of learning and reading, his passion for the great outdoors, and his commitment to social justice manifest in his children has been beautiful. As I step into the roles of spouse and stepmom, I’m reminded by his example that the best way to navigate this new world is simply to be my best self, and share that self with my family.

3. Friends are the family you choose—treasure them.

When he was in middle school (and I in fifth grade), Todd befriended two of his classmates, Donny and Brandon. Before long the three were inseparable. As they moved into high school, their circle expanded to include Stephen, Brad,  and Brandon’s girlfriend Pam; in college, the circle grew still larger. If I attempt to name names, I’ll miss some folks, but here’s what matters: they’re all still friends, all still in touch.  And not just like-your-post-on-Facebook-once-a-year in touch, but whenever-we-can-we-make-a-point-to-get-together in touch.

I’ve often admired and envied Todd’s tight-knit, long-term posse. I’m lucky to have a few lifetime friends, but many of my early friendships and even college besties have drifted away. Todd’s friends showed me that good friends can become an extension of family and inspired me to seek out an ersatz “family” of friends once I moved to Virginia. Those friendships have been essential to my survival as a long-term singleton and enrich my life immeasurably.

A few years after Todd separated from Natasha and son Hunter’s mom, he discovered that Lisa, the woman he’d crushed on back in high school, had recently gotten divorced. Lisa had been a year ahead of him in school and had a boyfriend whom she married not long after graduation; she and Todd never dated, though they were dear friends and Todd adored her. They’d stayed in touch over the years, and when he realized she was available, he made a bold move: he invited her to visit him out west. She flew out for a long weekend, he offered her a foot massage the evening she arrived, and nineteen years after they wrote heartfelt notes in each others’ high school yearbooks, they were married in a small chapel in the northeast Georgia mountains.

Issuing that invitation (accepting it, too) took real courage. But the answer is always no if you don’t ever ask the question. When I look at Todd and Lisa—married almost twelve years now, still going strong—I’m reminded: Take the risk. Ask the question.

5. Romance is sustained by attention, imagination, and being your partner’s best champion.

For Christmas a couple of years ago, Todd gave Lisa a set of nesting presents. I don’t recall the precise order, but it went something like this: the first, largest box contained a dress and a second box. The second box contained tickets to a concert, where she could wear the dress, and another box.  Inside that one was a gift card to restaurant near the concert venue, and another box. It held a hotel reservation for the night of the concert and a final box, which contained a beautiful chemise.

The Fairy Godfather and his bride

I want to be the person who gives my partner that gift as much or more as I want to be the one who receives it. It’s  romantic not because it’s particularly extravagant, but because of the time, attention, and imagination that went into putting it together. It demonstrates thought, and thoughtfulness. That’s romance.

Whether it’s as simple as writing sweet notes to your honey on Facebook, or as dramatic as shaving your own head to support your spouse through chemotherapy, partners who stay partners champion one another. I want to be as steadfast in showing my love for Steve as I’ve seen my brother be in demonstrating his love for Lisa.

6. Lasting love is worth the wait.

Nineteen years—you caught that, right? When they married in 2003, Todd and Lisa’s love story gave me hope that love would arrive in its own sweet time. Now that it finally has, having waited so long makes me appreciate it all the more. 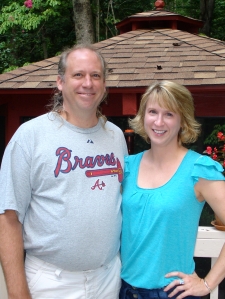 Todd and Lisa currently reside in Las Vegas, where they’ve raised five children, three of whom have left the nest to embark on various adventures. Todd and Lisa will be reading in our wedding ceremony, and their youngest, Ethan, will be our ring-bearer.

3 thoughts on “Six Lessons My Brother Taught Me”