The language of flowers, known as floriography, has been spoken for centuries: Shakespeare made use of it in numerous of his plays, as did Jane Austen in her novels. The practice of sending “secret” messages through flowers became extremely fashionable in Victorian times, when it was considered gauche and inappropriate to speak openly about one’s affections. It’s hard to imagine that the messages contained in these “tussie-mussies” (small bouquets wrapped in lace and tied with ribbon) remained secret, given the wide popularity of flower dictionaries that helped senders and receivers compose and translate. Many of the meanings we associate with particular flowers today descend from these Victorian-era dictionaries, some of which, like Kate Greenaway’s 1884 The Language of Flowers, remain in print.

Not all guides offer the same translations, though there’s some agreement. Roses have long been associated with love, but other flowers also indicate romantic affection. Tulips express love, although the giver needs to choose the color carefully: red tulips say perfect love and commitment, while yellow tulips have traditionally signaled hopeless love. For the true romantic, Greenaway’s flower dictionary notes that variegated tulips tell the recipient she (or he) is possessed of “beautiful eyes.” Daffodils convey regard or, even more pleasantly, “the sun shines when I am with you.” Ivy is associated with fidelity and marriage, while peonies suggest early love and bashfulness. Orchids indicate rare beauty. And for all the sapiosexuals out there, pansies are for “thoughts” and clematis indicates “mental beauty.”

February is the month for flower-speak, which piqued my curiosity: what stories might some of the flowers we’ve selected for the wedding tell?

Gerber daisies are happy flowers. I cannot look at one without smiling back at it. Traditionally, daisies have meant “beauty” and “innocence.” The latter may stem from the common white daisy, and the association of white with purity—the demure daisy, whose name derives from the Old English “day’s eye,” closes its petals at night. But the brightly colored Gerber daisies that make me grin also connote “cheerfulness” and “loyal love”: a good combination for a wedding bloom.

Gerbera or Gerber? Both: the first spelling comes from the flower’s scientific name, Gerbera jamesonii, while the second refers to the man the genus was named for, German naturalist Traugott Gerber. The jamesonii honors Scotsman Robert Jameson, who “discovered” the daisies in his wanderings near Barberton, South Africa in the early 1880s. Today the Netherlands grows more of the cheery flowers than any other country; our wedding daisies will come from Canada.

Gerber daisies grown indoors are said to improve air quality, though their enspiriting beauty is their greatest gift. Their broad, round faces make me think of the sun as rendered in a child’s drawing—bold, bright rays windmilling across the sky. To flourish, Gerber daisies require lots of light. Kindred spirits! 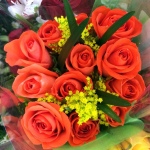 Roses have long spoken the language of love, but the color of the blooms determines the specific inflection. Some of these associations are familiar: red roses indicate true love and romance, white roses purity and new starts, yellow roses happiness and friendship. Other colors’ significance is less well known; lavender roses convey the “enchantment of new love.”

Orange and coral roses—which one florist called the “wild child of the rose family”—have been variously connected to passion, desire, enthusiasm, and fascination.

Orange roses are a 20th century cultivar, arrived at (unsurprisingly) by cross-breeding yellow and red roses. Since red roses signify romantic love and yellow roses symbolize true friendship, then the orange or coral rose might also suggest a love that holds and honors both elements.

Passionate desire and deep, abiding love rooted in friendship: I like it.

Like Gerber daisies, Gaillardia is also a member of the aster family and is possessed of a likewise cheerful countenance. Named after 18th century patron of botanical studies Gaillard de Charentonneau, Gaillardia is more commonly known as blanket flower, both because it grows in thick “blankets” of flora, and because it’s said to echo Native American blanket patterns.

The variety called Firewheel holds all the colors of an autumn sunset in its blooms, and it is the one I will carry in my bouquet.

I first encountered Firewheel growing on the side of the road in the Outer Banks when Steve and I took our inaugural vacation together, spending a week on Ocracoke Island. The trip was a defining moment in our relationship: a couple days in, Steve broke his toe. It was an open break that required a hospital visit and two round-trips to the mainland, and it took bicycling and long beach-walks off the agenda, two of the activities we’d been looking forward to most. I knew we were a good team when together we re-imagined our burden as a celebration: after the second day spent at the doctor, we picked up a bottle of wine and a block of cheese, and we turned the ferry ride back to the island into our own personal sunset cruise. It was on our way to catch our ferry “cruise” that Steve had pulled over so I could get out and investigate the firewheel, those brilliant spots of sun trembling in the ocean breeze.

There’s no folklore to be found on the meaning of this wildflower; there’s only what it means to us: it speaks to me of the beach and its beauty, it reminds me of the wonders of the wild, treasured by us both. And we found it, together, in the place where we first declared our mutual love.

It’s earned a place at the altar.

Before you send your next bouquet, you might want to check out one of the Victorian guides to the language of flowers or ProFlowers’ blog on their various meanings!

I’m pleased to announce that Mark Frye of Creative Occasions in Vinton, Virginia will be designing the flowers for our wedding.  I can’t wait to see what magic he works!