I recently drove to Clearwater Beach from Tampa, where I was attending a conference. I left in the middle of the day, landing myself smack in the middle of high beach traffic, exacerbated by construction obstacles and a GPS that kept trying to send me the wrong way down one-way streets. Return traffic was even more frustrating, driving back to the city a long, arduous process made doubly painful by the fact the beach itself was disappointing. Near the Coronado St. pier, cabanas lined the shore from one end to the other, jammed so tightly side-by-side that if you stood behind them, you could barely see the ocean. Stand in front, you’re crammed elbow to elbow, towel to towel, with spring breakers of every stripe. There were no shells to be seen on my visit, and the only sea-life I encountered were the poor gulls being harassed by a kid pretending to hold a cup of food, then splashing the birds with water as they approached. Walking along the surf-line felt more like playing chicken than taking a stroll, since every other step required dodging right or left. Parking to enjoy all these privileges: insanely pricey.

There were a few unexpected delights: an alfresco dinner of a grilled grouper sandwich and cold lemonade, sand that slipped like silk over my bare feet. And a brief conversation with Mary Beth, a bubbly young woman who bounded up off a nearby hammock and asked to share my shade after I gave up on the crowds and retired to a cluster of palms well behind the cabana line. Mary Beth and I traded talk of vintage clothing finds, and she complimented us on our similar (good) taste in sunglasses. She was as sunny as the bright orb above.

Still, I left Clearwater almost more stressed than when I arrived. It was a bad fit and bad timing. The costs outweighed the benefits, and I felt uncomfortable, disoriented. Getting there was difficult, getting out even worse. The best thing about the visit was the lesson learned: no matter how much I loved the ocean, not every beach would make my heart sing.

I drove to St. Pete Beach from Tampa early on a Saturday. The timing was right: the traffic light and steady, the GPS cooperative, most of my journey lit by the warm pink glow of sunrise. When I arrived at Pass-A-Grille, the parking lot was near empty, and I parked just a few yards away from a public access boardwalk over the dunes. As I paid the fee at the meter, I noticed a beach chair leaning up against a nearby trash can. It wasn’t fancy, but it wasn’t broken. It seemed to have been left there just for me.

I carried the chair and my beach bag over the boardwalk to where a wide plain of sand stretched out before me. A few early morning walkers strolled along the edge of the surf, but the beach was otherwise empty of people. Something like fifteen or twenty shore birds—laughing gulls, sandpipers—sat sleepily on the beach. Four pelicans flew over the surf, dipping and diving for breakfast, occasionally making an improbably graceful three-quarter-turn-landing on the waves. The sand was soft and cool beneath my feet as I slipped off my flip-flops and unfolded the chair.

I sat in awe for a while, watching the pelicans’ show. Within arm’s reach, I found an olive shell, then an auger. Wandering up the beach, I spotted more augers, a few small calico scallops, a worm shell. I picked up five beautiful glossy olives—each of them with a live animal still in residence. I tossed them gently back into the ocean.

I soon discovered the center of the action: a beachfront grill with outdoor seating where the Cosmic Cowboys played Jimmy Buffet and the Eagles on guitar and harmonica while a host of beach-goers ate breakfast and explored the booths of local art and jewelry vendors. One tasty cheese-spinach-bacon omelet and leather-wrap bracelet later, I walked back to my little borrowed chair in the sand. The crowds had started to come in, but most visitors had clustered much closer to the grill than I had, leaving lots of open space to enjoy.

Another long walk, some reading, some writing, a quick dip to cool off. A pair of gulls landed a few feet from my chair and entertained me with an avian Abbott-and-Costello routine. It was time to pack up and head back to the city. I left my magic chair where I’d found it that morning.

Pass-a-Grille: the trip in was easy, the timing just right. The gifts were embarrassingly plentiful, beauty abounded, happy surprises and joyful laughter were never far away. The world felt in balance, and I wanted to linger indefinitely.

Ask yourself: which of the two snapshots is most like your relationship? 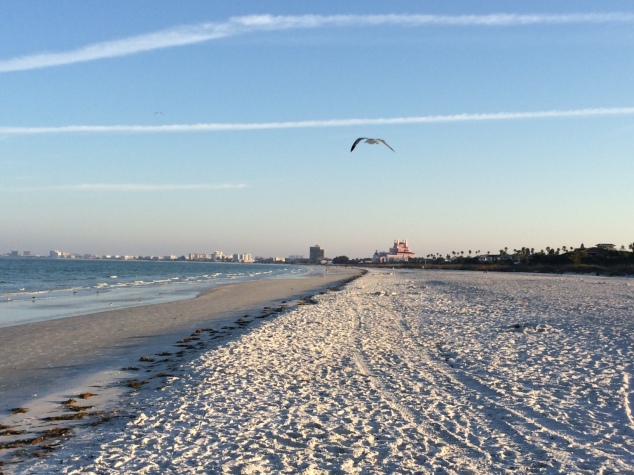 You deserve to find your Pass-A-Grille.