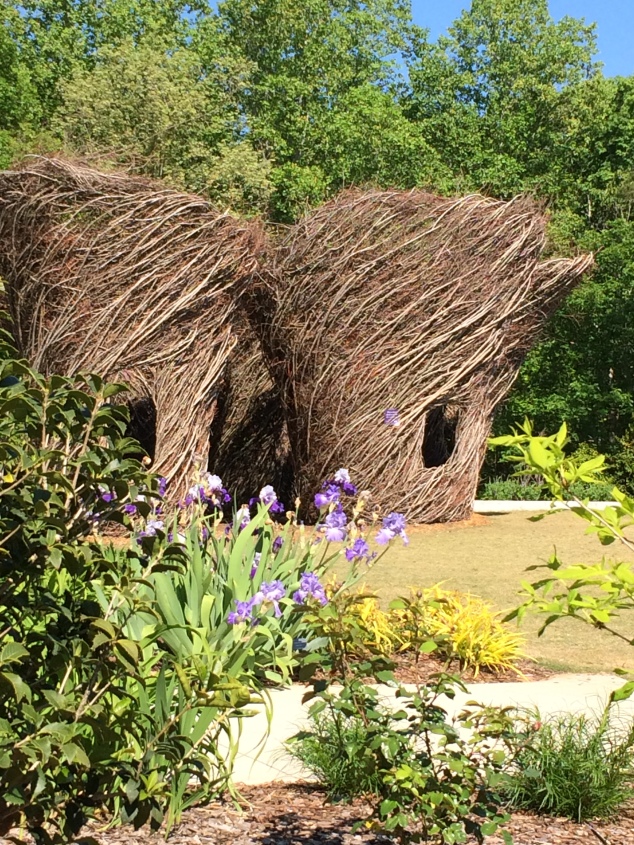 Late 15th century, past participle form of weave: from the Old English wefan, meaning “to weave, form by interlacing yarn.” Cognates of weave include the Sanskrit ubhnati, “he laces together” and the Greek hyphe or hyphos, “web.” In the late 14th century weave took on the extended sense of “combine into a whole.”

Circa 1600, probably related to whimwham, meaning “fanciful object” and whim, as recorded in the 1690s, meaning “caprice, fancy, sudden turn or inclination of the mind.”

I recently had the pleasure of visiting Patrick Dougherty’s “Woven Whimsy: Stickworks” at the Atlanta Botanical Garden – Gainesville. I was intrigued in part by the name of the exhibition; I am, after all, the bride who declared her wedding decor style “vintage whimsical.”

Artist Dougherty was in residence from late March until early April and created the unplanned sculpture onsite from locally harvested wood, branches, and twigs. He’s completed over 250 such sculptures and has said about working with sticks that it is “something that stirs the sense of simple shelter.” Walking inside them stirred in me the same dizzying mix of wonder, comfort, and occasional chaos that is marriage.

The sculpture creates a sense of both enclosure and openness, the whirling weave of the sticks suggesting at once movement and stillness. The outsize scale and organic simplicity places the experience somewhere between wandering beneath towering skyscrapers and exploring a cluster of fairytale cottages.

From afar, they look almost like baskets, and like all art, they hold more than the substance of their making. They feel, inside, like giant sheltering nests, if nests had doors and windows.

Adjective, 1650s, “making or using a nest.” Also refers to objects “fitted into one another.” 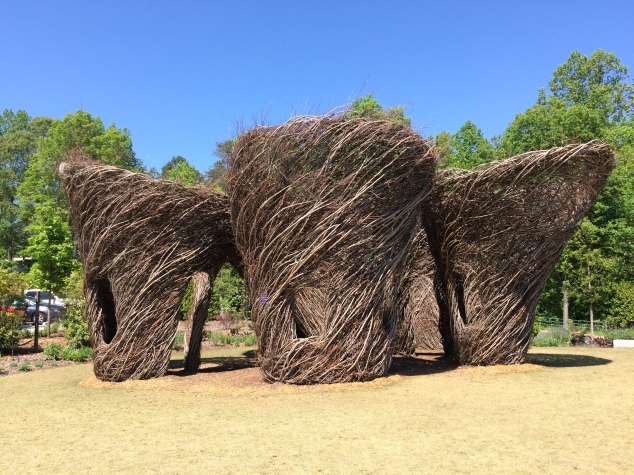 Where there is art, there is life. Long live whimsy!

All definitions adapted from the Online Etymology Dictionary.

I recently drove to Clearwater Beach from Tampa, where I was attending a conference. I left in the middle of the day, landing myself smack in the middle of high beach traffic, exacerbated by construction obstacles and a GPS that kept trying to send me the wrong way down one-way streets. Return traffic was even more frustrating, driving back to the city a long, arduous process made doubly painful by the fact the beach itself was disappointing. Near the Coronado St. pier, cabanas lined the shore from one end to the other, jammed so tightly side-by-side that if you stood behind them, you could barely see the ocean. Stand in front, you’re crammed elbow to elbow, towel to towel, with spring breakers of every stripe. There were no shells to be seen on my visit, and the only sea-life I encountered were the poor gulls being harassed by a kid pretending to hold a cup of food, then splashing the birds with water as they approached. Walking along the surf-line felt more like playing chicken than taking a stroll, since every other step required dodging right or left. Parking to enjoy all these privileges: insanely pricey.

There were a few unexpected delights: an alfresco dinner of a grilled grouper sandwich and cold lemonade, sand that slipped like silk over my bare feet. And a brief conversation with Mary Beth, a bubbly young woman who bounded up off a nearby hammock and asked to share my shade after I gave up on the crowds and retired to a cluster of palms well behind the cabana line. Mary Beth and I traded talk of vintage clothing finds, and she complimented us on our similar (good) taste in sunglasses. She was as sunny as the bright orb above.

Still, I left Clearwater almost more stressed than when I arrived. It was a bad fit and bad timing. The costs outweighed the benefits, and I felt uncomfortable, disoriented. Getting there was difficult, getting out even worse. The best thing about the visit was the lesson learned: no matter how much I loved the ocean, not every beach would make my heart sing.

I drove to St. Pete Beach from Tampa early on a Saturday. The timing was right: the traffic light and steady, the GPS cooperative, most of my journey lit by the warm pink glow of sunrise. When I arrived at Pass-A-Grille, the parking lot was near empty, and I parked just a few yards away from a public access boardwalk over the dunes. As I paid the fee at the meter, I noticed a beach chair leaning up against a nearby trash can. It wasn’t fancy, but it wasn’t broken. It seemed to have been left there just for me. END_OF_DOCUMENT_TOKEN_TO_BE_REPLACED