It’s that time of year again: Christmas carols ring through every shop, holiday cards outnumber the bills in my mailbox, and the Hershey’s kisses “handbells” make me giggle every time the last little bell says “Shwew.” A seasonal shift is evident on social media, too, as friends share recipes for crazy-good sounding cookies and post pictures of children sitting on Santa’s lap and little elves sitting on the toilet pooping peppermint candies.

Ah, the “Elf on the Shelf,” icon of the 21st century Christmas. According to Carol Aebersold and Chanda Bell’s 2005 children’s book, the diminutive Elf is a scout for St. Nick who hides in various places around the house to watch and report on who’s naughty or nice. The toy, understandably I think, garners equal amounts devotion and derision. For those who have children and can share in their daily delight at discovering what that crazy Elf is up to now, it’s a funny and charming pastime. As a long-time single woman whose home was once broken into by the neighborhood voyeur, I find the idea of an odd little man popping in and out of my house and spying on me…icky. Sinister, even. Besides, don’t we have the NSA for that?

Still, just because their cute is my creepy, I don’t begrudge my friends their joy in elfin antics. And I hope none will begrudge me my confession that the same celebratory ritual that brings others great happiness makes me shiver in revulsion.

Please don’t be offended if you have a bottle of unity sand sitting on your mantle right now. It was your wedding, and your ritual, and if you love your unity sand and it makes you smile every day to see its wavy layers, I wish you nothing but more joy-in-a-jar. Seriously.

A Short History of Unity Sand

My kind of sand!

Don’t get me wrong: I love sand. In fact, there’s not much I enjoy more than sinking my bare toes in warm sand or letting its wispy grains slip through my fingers. But that’s at the beach, where sand belongs. And that sand is sand-colored, white or tan or (on a few select shores in Hawaii I hope to visit someday) black—not dyed yellow or blue or pink and packaged in a “sand ceremony kit” sold on the internet or the wedding aisle of your local craft store.

For those who are wondering, what on earth is unity sand? a brief primer. The unity sand ceremony is the newfangled version of the unity candle ceremony. The bride and the groom each hold an individual vessel of sand, and to symbolize the joining of their lives in matrimony, each pours his or her sand into a larger, central vessel. In some cases, other family members or even the wedding party participate. As howstuffworks.com describes it, “the meaning is clear: The blending of two different beings…into a single, inseparable unit that is their marriage–the joining of their lives. Hard as it would be to separate out those grains of sand, that’s how difficult it is to separate these two people.”

When I read this last to fiancé Steve, he offered, “How about a good lawyer?”

For blended families, especially where there are children on both sides, I can see some value in the ritual; it’s a cute way for young children to play an active role in the wedding (the ceremony is reminiscent of kids’ carnival booths.) Still–and I hope I’m not destroying anyone’s romantic visions here—it’s a manufactured tradition. The unity ceremony has been around a while, but unity sand only became popular, according to Sharon Vaz of http://www.unitysandceremony.net, when Trista Rehn and Ryan Sutter of The Bachelorette incorporated a unity sand ceremony in their 2003 televised wedding. Despite its rather recent reality TV pedigree, Vaz proclaims unity sand a “timeless ritual,” a marketing ploy reminiscent of a certain Elf, whose 2005 debut storybook was subtitled “A Christmas Tradition.” “Instant tradition” is an oxymoron. Traditions develop organically, over time. Instant is for oatmeal. Attempting to establish the sand ceremony’s longevity, Vaz explains that it likely originated with a sacred Hawaiian wedding ritual. Great! Now we’re also appropriating cultural traditions.

Unity sand is pretty, but—not unlike our elfin friend—it’s also a marketing masterpiece. Three candles and a couple of matches don’t make big money, but unity sand requires at least three different vessels—“In styles designed with your sensibilities in mind”—and multiple colors of sand (over 25 to choose from!). Couples are encouraged to personalize vases with monograms and tags at additional cost. After the wedding, there’s the expectation that you’ll set the sand out on display in your house. Proponents focus on the memories this will recall; I think of it as something more to dust. And for those partners who keep some sand in each of the original containers to acknowledge retaining their individuality, there are three vases to display. And dust. And pack up and try not to break when you move, not to mention feel guilty about ever getting rid of because, after all, they’re from your wedding.

I’m particularly befuddled by the industry’s emphasis on the need for a “permanent memento,” ensuring you have a “meaningful souvenir of the big day.” Wedding ring, anyone? And then there’s the small matter (as Steve’s son Tucker pointed out) of that person you’re going to wake up next to every morning. You know, your keepsake spouse.

Here’s the thing: as Steve suggested in his recent guest-post, we share an aversion to the idea of losing our individual identities when we marry. I dislike unity sand primarily because I reject its symbolism. We aren’t “blending” ourselves together to become one person, one “inseparable” unit. As Steve said, “Nobody is completing anybody here—we are two complete (flawed, a little scarred, and perfectly imperfect) individuals making a choice to enjoy a shared life.”

Maybe it’s because we’re nerds, but if we’re searching for a metaphor, I think a Venn diagram is as a good representation of a healthy marital relationship as any. Two separate circles that overlap in the middle. Sometimes the overlap is significant, sometimes a little less so, but we remain always simultaneously connected and separate.

It would be a little weird to draw a Venn diagram on a whiteboard at the wedding, so if we do any kind of “unity ceremony,” it will likely be two flowers placed in a common vase. That, too, is a metaphor that works for us: each of us is a separate being, complete in and of itself, like the two flowers. The marriage is represented by the vase; it is the vessel that holds us together, the space in which we coexist and unite our lives, even as we maintain our individual selves. 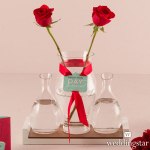 If you love elves on shelves, or unity sand, or both, you should have and delight in them. I’ll seek other merries and metaphors that suit me, and we’ll all have happy Christmases and good nights.

Though if anyone’s Elf decides to dress in beach gear and dip his toes in their unity sand? Now that is something I’d like to see!

2 thoughts on “Elves on Shelves and Other “Traditions”–or, Why I Can’t Stand Unity Sand”