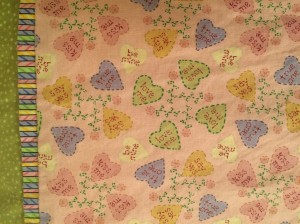 For Valentine’s Day this year, my mother sent hubby Steve and me a set of handmade holiday pillowcases. She’d instructed us to open the package the first of February so we could enjoy them all month. As I pulled them from the wrapping paper, Steve raised his eyebrows.

I wondered for a moment myself how well the pastel palette would blend with the red, white, and turquoise wedding ring quilt we keep on the chest at the foot of the bed. But it would be a stretch to say we have anything approaching a “color scheme” in the bedroom at the moment, and the cases are cheery and cute. The primary (pink) fabric, trimmed in a wide band of green, features candy conversation hearts proclaiming sweet nothings: “Love me.” “Be mine.” “Say yes.” All quite fitting for our first married Valentine’s Day.

When I called my mom to thank her, I asked if she’d pre-washed the material as she usually did, or if I needed to run them through the laundry before putting them on the bed.

“Well, I think so, but I’ve had those put away for a while, so I don’t really remember,” she replied. “I made them years ago.” She told me she’d made a set for my brother and sister-and-law, too, and she’d sent those out right away. “But I held on to yours. I just knew you’d find the love of your life eventually. And see, I was right—you did!”

My mother kept the faith, it seems, longer than I had. In the few years before I met Steve, I’d decided I’d better embrace what appeared to be my permanent single status. I might not have a choice about the status itself, but I could choose to see and exercise whatever benefits being on my own offered. Spend a month alone at the beach collecting shells, researching, and writing? Check. Do nothing but read for an entire weekend? Check. Paint my dining room cabinet burgundy with aqua and purple accents? Oh, yes, I can. I traveled on a whim, took up running, devoted my energy to my girlfriends. I found ways to create my own happiness, and I remain grateful for the gift of discovering that doing so was, to a large degree, within my control.

At the same time, I spent several of those years entwined in a push-me, pull-me romance, a part-time love affair that was toxic in many ways. It’s only too easy to hear “I like you, but you’re not right for me” as “You’re not right” period: not good enough, not lovable. I’d accepted my single status in the abstract, and even, on occasion—witnessing an exquisite sunset in utter solitude, brimming over with joy while dancing with friends—in specific moments. Yet (obviously) I still didn’t quite believe being alone was better than being in an unsatisfying relationship. I didn’t trust, deep down, that I was worthy of love—my own, much less someone else’s.

As I was writing this post, a quotation from Sex and the City fortuitously showed up in my Facebook newsfeed: “The most exciting, challenging, and significant relationship of all is the one you have with yourself. And if you find someone to love the you you love, well, that’s just fabulous.” It took me a while, but by the time I met Steve shortly after Valentine’s Day in 2013, I was finally beginning to understand what it really meant to be the agent of my own happiness. I’d made Valentine plans for myself that year, signing on as a figure model for an art class. It was exciting, scary, daring—and my post about it on Facebook led to the setup that introduced me to the man I would marry.

Valentine’s Day can be tough for the unattached. But love comes in many forms, and all of them, not just romance, are worth celebrating. Carrie Bradshaw pretty much nailed it: the real trick, and treat, is becoming your own Valentine. Being someone else’s: bonus!

I would have found my way to a different kind of happy, if fate had taken me down some other road—and I would have enjoyed those cute pillowcases even without a partner. Still, I don’t begrudge my mom’s hanging on to them. They were her wish, her dream, her prayer that I would find true love, a man who would choose to lay his head beside mine for a lifetime, hold my heart dear as I held his.

And now that I’ve found him, and now that the pillowcases are washed and on the bed, I must confess: I think their sentimental pink proclamations look especially lovely next to the other pillowcases we received as a shower gift, the ones that pronounce us “Mr.” and “Mrs.” 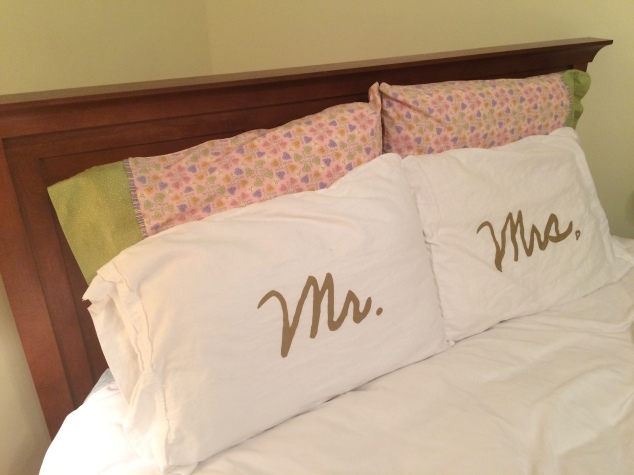