“Work is good. No one seriously doubts this truth…. But work is not the only good thing in the world; it is not a fetish to be adored; neither is it to be judged, like a sum in addition, by its outward and immediate results. The god of labor does not abide exclusively in the rolling-mill, the law courts, or the corn field. He has a twin sister whose name is leisure, and in her society he lingers now and then to the lasting gain of both.”

It probably goes without saying that we folk in Southwest Virginia are snowed in. The white stuff rolled in early yesterday morning, a good inch already on the ground when Steve and I got up around eight. Friday’s classes had been called off for both of us by late Thursday afternoon, so we could enjoy a leisurely morning, lingering over a shared breakfast, sipping our respective cups of tea and coffee, watching the white flakes outside pile higher and higher while we remained snug inside, cats and dog cuddled close, the day stretching out before us. What to do with this unexpected gift of unscheduled time?

Both of us soon agreed—admitted to?—our morning plans: catching up on emails and work.

One of the benefits of being an academic: when an epic blizzard comes through, you usually get (unlike, say, nurses, or police officers, or those who work for the power company) a snow day. One of the drawbacks: like your students, you perpetually have homework. There’s always something you could be doing–planning for upcoming classes, reading up on research, grading papers. A “day off” is a relative concept, as are “free” evenings and weekends (not to mention those famously “free” summers). You have to choose to be “free.” You have to claim your time, decide you will, on this day, for this hour, prioritize family or fun, love or leisure.

When Steve and I first announced we’d chosen a September wedding date, we got a few puzzled looks, one or two curious inquiries: “School will be in session then, right?” As the date neared, more and more people, all of them fellow academics, questioned our choice directly. “Why on earth did you pick a date during the academic year?” asked one colleague. Some questioners expressed amazement, others concern, a few dismay verging on horror. I was never quite sure how to respond: school’s in session nine months of the year. It’s busy, yes, but life beyond goes on. Doesn’t it?

Assuming the best of intentions, I can guess our questioners were motivated by a sense of protectiveness, the subtext being, why would you subject yourself to extra stress? Layering final ceremony preparations on top of the annual beginning-of-the-year crunch wasn’t easy. I distinctly recall one moment when the shop we rented tuxes from called saying they needed an additional measurement for my nephew’s suit before they could order it, and they had to order it that day. Never mind they’d had his measurements for months and hadn’t told us there was a problem. I found myself sitting in my office, shaking as I stared at the syllabus I was trying to finish on my computer, and nearly shouting at my poor mother on my cell: “Please deal with this. I cannot deal with this right now!” It was tough, starting the semester simultaneously with managing those last details, but frankly the far bigger stress factor was our having moved into a new house one month before we got married. It was not the moving timeline we’d hoped for, but unlike like our wedding date, which we could and did choose for particular reasons, the housing market was not subject to our control.

My parents are academics, and I married one; maybe it runs in the blood. I love my work, my colleagues, my students, but there’s something a little sinister underneath those questions, the insinuation that, whenever school is in session, work should demand our complete and utter devotion; that nothing else—not even a once-in-a-lifetime celebration of life-changing love—should share in, much less trump, our attention. A life that embodied such a belief would be a life dangerously out of balance; it would be a life with no room for finding, much less fostering, a mid-life love. Where did we get that idea? And why have so many of us accepted it?

Of course, it’s not only academics who’ve bought into a model that over-privileges work. In a recent interview, Brigid Schulte, author of the bestseller Overwhelmed (2014), noted, “College-educated professionals are working longer hours than ever…. [O]ur culture, starting in the 1980s, began glorifying not just hard work, but overwork.” According to Schulte’s research, Americans as a whole “don’t value taking the time to refresh not only our energy, but our souls,” despite the fact Stanford economist John Pencavel has shown that “the longer we work beyond 40 hours a week, the steeper the productivity drops.” We value overwork, having accepted a cultural mindset “firmly set against the importance of leisure and play” and adopted a “culture of busyness” that’s made being busy into “a competitive sport,” a “badge of honor.”

Over-valuing work (and, as a result, undervaluing most everything else) isn’t a new problem. Agnes Repplier, quoted in the epigraph, warned us that work “is not a fetish to be adored” well over a century ago: her essay “Leisure” was first published in 1893. Repplier argues that not only the individual but society as whole benefits from balancing work with leisure. “[T]here is a leisure, ” she notes, “that does not mean an easy sauntering through life, but a special form of activity, employing all our faculties, and training us to the adequate reception of whatever is most valuable in literature and art.” Writers and thinkers and artists need time, the leisure of reflection, to write and think and create. German philosopher Josef Pieper made a similar argument in Leisure: The Basis of Culture in 1948 claiming, as his title suggests, “Culture depends for its very existence on leisure.” More recently, happiness researcher Shawn Achor has found that happiness depends largely on one’s “depth of social connection”—enhanced in part by “increasing the meaning and depth of…relationships outside of work.” Happy people, people who put a premium on caring for their relationships, experience a 31 percent increase in “productive energy” and their “creativity triples.”

We know this, we academics. A key part of our college’s mission is to educate the “whole student,” because we know that balance is essential, that nurturing not only the intellectual, but also the physical,  spiritual, and social, is key to the “good life.” We recognize the value of reflection, the payoff of play, in fostering innovation and creativity. We know. Yet too often we fail miserably in these pursuits as role models.

Why did Steve and I choose a September wedding date? Perhaps the better question is, why not? We chose September

because fall is Steve’s and my favorite season

because we wanted to get married outside, and historically September is the driest month in Virginia

because we wanted to get married in a place with personal history, and rooftops swelter in midsummer

because our son was studying in England through June, and we wanted him to celebrate with us

because there is more to life than work, even meaningful work, and I do my best work when I am a whole and healthy person

because love is a year-round commitment.

We spent the morning catching up on work. The afternoon? Time for a romp in the snow! 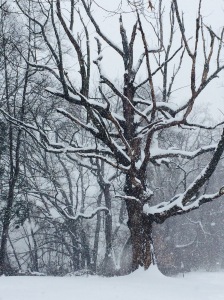