In January, hubby Steve and I engaged in what I imagine is, for many, a newlywed rite of passage: we went to our first home show.

I’d seen the big winter home show advertised most every year since moving to Virginia, and once or twice I’d tinkered with the idea of going. I subscribe to several home decorating magazines, and I’m a sucker for HGTV (though I liked it better when it was more renovation, less real estate—already bought the house, thanks). But back then I rented my little purple cottage. I’d painted several rooms when I’d first moved in, but I wasn’t responsible (thankfully) for the likes of upgrading the bathroom fixtures, replacing leaky windows, or waterproofing the basement. My landlord made those decisions, and (thankfully, again) footed the bills. Given that, I wasn’t sure what a home show had to offer me.

When Steve and I got married—a few months before, in fact—we became joint homeowners. We love our grand old house, vintage 1924, but she is in need of a little love. There are crumbly spots in the basement floor, mysterious puddles that appear after heavy rains. The downstairs bathroom (which I’m fairly certain used to be a fireplace, butler’s pantry, or some combination of both) was clearly fitted in the ‘50s, when someone thought colorful tubs and toilets were a good idea. I’m grateful the fixtures aren’t harvest gold or hospital green, but there’s definite room for improvement. We have some serious landscaping to do once the weather allows it, and the painting—oh my. I’m grateful the previous owners chose to neutralize every room with what’s at least a livable shortbread-yellow, but the sameness is going to kill my soul if we don’t get some richer color on at least a few walls soon.

The show is held in a large arena-type hall in the local civic center. A craft show I love is held in the same space every October, so I’m familiar with its cavernous contours. Still, upon entrance, it’s a bit overwhelming. The first booth we stop at turns out to be marketing a home-use electrical stimulation unit that looks remarkably like an early-version iPod. It’s easy to use and the pulses feel wonderful on my always tight-neck. But I can’t quite relax. Why, exactly, is an individual stress-reducing device for sale at the home show? Homeownership is the American dream. I mean, okay, we’re still unpacking boxes after six months in residence, but just how high do they expect my stress levels to rise?

I pass up the TENS unit, tempting as it is, but I do succumb, later, to a lavender-infused satin eye-pillow that can be heated in the microwave or cooled in the freezer, sold by a booth whose aromatic inventory makes me want to lie down on the floor and imagine I’m napping in the English countryside. While most of the show offerings are geared toward home maintenance and large-scale renovation, there are some smaller-scale, homey home goods I hadn’t expected: fragrant handmade soaps, rich Vermont maple syrup, even local wines for tasting. We peruse the plant offerings at several nursery displays, chat with a couple of bath renovation businesses that promise to bring our turquoise mid-century tub into the twenty-first. We pick up cards from basement gurus and contemplate replacing our pillows with ergonomic bamboo versions that come with their own carrying cases.

And then we buy a mattress.

In our defense, we’d been on our feet, standing and walking on cement, for several hours by the time we got to the Tempur-Pedic mattress display. I’d hazard those sneaky salesfolk put the booth at the back of the hall for that very reason. Buying a new mattress wasn’t exactly an impulse decision; we were in the market, though we hadn’t anticipated making the purchase that day. I’d chalk the fact of our taking the leap up to a good deal combined with a genuinely helpful salesman, but no discount or friendly disposition could match the persuasiveness of the decade-old mattress we both awakened on each morning with stiff backs and achy joints.

A big purchase hadn’t been part of the plan; we’d gone with the goal of gathering information and amassing a file of possible vendors. But there we were, engaging in a second newlywed rite of passage: our first major joint furniture purchase. 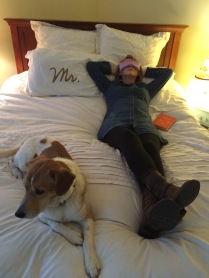 All in all, the home show was a success. After we saw the fellow there who did our built-in closet, he finally ordered the extra shelf we’d been asking for so we could put the final touches on organizing. We watched a great demonstration by “The Wall Wizard” Brian Santos, whose book of tips will make all the painting we need to do go much more smoothly. We found an electrician to replace some faulty outlets, and a plumber who located the gas line to our fireplace, which has since provided several cozy evenings in the parlor. And our new mattress is AHHHmazing.

Five months married, I still wake up some days surprised to find, when I roll over, that someone else is there beside me. (This is definitively aided by the Tempur-Pedic—those commercials that show a wine glass remaining upright on one side while someone sits on the other don’t lie.) This big old house is a work in progress and will be for a while, so I welcome the odd reminder I’m not in it alone. On those days I reach my hand across the bed to grasp Steve’s, resting in the quiet joy that we’ll make this house a home, together.