Having now been romantically attached for the longest stretch of my life ever—three years, counting courtship and marriage—I’ve come to recognize that some of the best things about being in a committed relationship are the things that aren’t part of the deal. Namely, the pain of break-ups and being on the rebound.

Single disastrous date or months-long misguided relationship, a rebound is usually ill-begotten and ill-advised. Most of us make questionable choices in the throes of grief and anger. After I exited a longterm relationship with an organizationally-challenged artist and musician who regularly joked he “needed an adult,” I dated a highly structured man; he always had a plan and managed all the details. It was a relief to have someone else make decisions and take control—until he began speaking for me when I preferred to speak for myself. Another time, rebounding from dating an adventure-seeker, I was charmed by a quiet man’s declaration that he believed in moderation and taking things slowly. We took things slowly all right: he disappeared between dates, then ghosted me altogether. Convincing myself to go out with a young, brash, frat-boy type after a witty doctor broke my heart = the single most awkward date of my life.

The “What was I thinking?” rebound is exemplified by Sex and the City’s Carrie Bradshaw. She drowns her sorrows by hooking up with a celebrity, only to realize when he offers a toothbrush and t-shirt the next morning that he keeps an entire drawer full of the items to supply his multiple conquests. Worse, you can make a bad judgment call in the dim light of loss and wake up next to someone violent or strung out, or to extra partners with whom you (surprise!) don’t recall agreeing to share your revenge sex.

Rebounds are reactive. We feel rejected so we return the rejection the only way we can: by finding and throwing ourselves at someone as different from the lost love as possible. We choose bad matches and bad boys (or girls) to spite the exes, eager to show just how over them we really are. We take risks, eschew reason, even flout our bad and ultimately self-destructive decisions. As if lashing out in that way ever hurt anyone but ourselves.

And now the citizens of the US of A are on the rebound, and I fear we’re about to wake up in bed with some big, bad regrets.

A lot of people are angry and disappointed. Many are still feeling the effects of the financial crisis of 2008, reeling from loss of jobs, retirement savings, even homes. College students are concerned about mounting educational debt and limited employment opportunities. Some voters on the left have been frustrated that Obama’s program has been less progressive than promised, while those on the right are even more frustrated by the opposite, by what they see as an impotent Republican congress: after they voted for politicians who vowed to repeal the ACA, to foil the President’s immigration policies, to block his agenda, their elected representatives have failed to do much of anything.

While I would argue you’re not “disenfranchised” just because you didn’t get your way, I understand that an awful lot of folks feel misled. You were courted. Promises were made. You did your part.

And then you got dumped.

So you’re angry. You’re grieving. You feel rejected and lost and dismissed. What else to do but put on a brave face and get back out there? You’re on the rebound, baby, and you want to teach those folks who rejected you a lesson. Who needs them? You’ll show them what rejection looks like!

It appears to look a lot like Donald Trump. 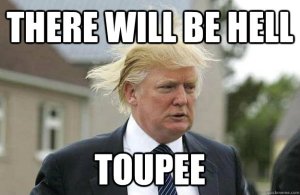 America, you’re drunk. You’re mad and sad and not thinking clearly and you’re crying in your beer, and you’re sidling up to the skankiest character in the deliberately dimly-lit bar and offering your allegiance just to make a point. The thing is, those people who “rejected” you, the ones you’re trying to spite? They don’t much care, not about you, anyway. If they did, they would have treated you better in the first place. The only one who’s going to get hurt here is you. And every other citizen who has to live with the results of your impaired judgment and irrational rebound decision.

Be careful, folks. You’re going to wake up to a shock of yellow hair and spray-tanned skin, to a racist, sexist, narcissistic bully who’ll be more than happy to count you as a score, then toss you off as just another conquest who should have known what she was getting. You’re going to wake up and realize you’re in bed with Donald Trump for the next four years—and it’ll be far too late to grab your clothes and dignity and run.

Please, America. Let’s wake up before that happens.